The story begins with  a young man in his 20s, Rocky, who needed to “find a job and make a name for himself.” He was flipping burgers as manager of the Harvey’s in the downtown core. Soon, he left the restaurant business and became a taxi driver and before too long he had memorized the entire map of the city in his mind. He knew the neighbourhoods, districts and clientele like the back of his hand, as the expression goes. Next, he wanted to work with people, preferably during daylight hours. He registered for his real estate license and began to successfully broker deals between buyer and seller. Everybody was happy, Rocky felt that in order for a deal to be considered a real success, usually either the buyer or seller would benefit more than the other, and he did not support the pressure tactics of the agents and companies in the industry. Against the advice of his friends he once again left the industry, and decided to work in a stereo shop so he could at least listen to his favourite records while he was working.

It wasn’t before long that Rocky started to do really well in the electronics business, by accident of course. He first started working as a box boy for local Jewish retailer in the downtown core once again. In the span of 11 days he completely transformed the leaking basement with loads of dead stock left over from the management upstairs. Using the discarded stock he turned a profit selling the products to clear out the space. The owner was so impressed that he promoted Rocky to the sales floor on the spot, and within 90 days he became the #1 salesman with the highest customer retention rate.

After only a few short years working the floor of stereo and speaker products, Rocky was hired away by an unknown manufacturer, JVC who was looking for a way to penetrate the market which was dominated by Sony at the time. It was here that Rocky was appointed a mentor from Japan for 10 years. He learned fast that in order to succeed in achieving his goals he needed to stop talking and start listening. This is where the principles were ingrained that would later launch the business Centre Hi-Fi. Rocky learned, that as a dealer, he had to treat his dealers like gold and go over and above with service they had never before experienced. Between 1970 and 1984, Rocky grew JVC from zero to over 90% market share in consumer electronics. To this day, a share which is still unheard of.

Rocky decided he could no longer grow the JVC brand and over the previous decade he had gained some serious chops in advertising, stock allocation and general business practice on the retail side. He was able to gain this valuable experience by working very closely with his dealer network which he served during his time at JVC. In 1985, happily married to Silvia with two daughters and a son on the way, Rocky made the bold decision to mortgage his house, and his family’s future to scrape up the funds to start Centre Hi-Fi.

Rocky purchases 3 store locations in Montreal on the verge of going out of business. The first location is made into an office and retail store front off the 40 Highway and Langelier. This will be the neighbourhood of the Centre Hi-Fi head office for the next 36 years! 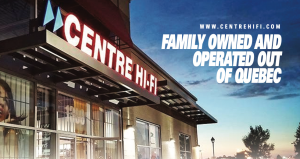 By 1995, Centre Hi-Fi has ballooned into a successful consumer electronics chain operating 20+ stores out of Montreal and it’s surrounding towns. Rocky opens a 30,000 square foot warehouse and flagship location in the eastern part of town. Based on his history with the manufacturer’s, Rocky is able to secure bulk purchase pricing to ensure the lowest cost is paid and the savings are passed to the customer. At the same time, TV sales have accelerated and Centre Hi-Fi has now become a major retailer of panels in addition to the turn tables, speakers, amplifiers and micro systems sold during day 1.

With Centre Hi-Fi becoming a known brand in Eastern Canada, the industry is transformed when Centre Hi-Fi agrees to purchase Dumoulin enterprises and amalgamate the staff of both organizations. In the process, Centre Hi-Fi develops strong and lasting partners from Quebec townships. The brand is now populated by 45 locations across Quebec.

In Montreal, Centre Hi-Fi, Future Shop and Best Buy jockey for positioning as the premier retail destination for consumer electronics. Future Shop ceases to exist overnight and leaves Centre Hi-Fi as the only Canadian owned chain operation in Quebec, along with the American retailer Best Buy. The wave of High Definition panel TVs has grown the Centre Hi-Fi business for the past decade, but the industry is reaching a saturation point.

Rocky retires after 51 years in the business. His son, Daniel leads a renaissance leading back to the company’s roots on Music, quality selection of product and unrivalled customer satisfaction. Totem Acoustic, world renowned speaker manufacturer (and local!) partners with Centre Hi-Fi to lead the transformation.